Getting a video right is hard.  Thinking up questions, focusing the camera, setting the lights  — trying to put someone else at ease

when you are darn nervous yourself.  I’m usually pretty decent at dealing with these things — (although there was that time that Alma Katsu had to start the interview over twice when someone walked into the room , or when I ran out of film in the middle of an interview for Marcia Talley.  Sigh.)

But, what you never expect is to forget a fact — especially an author’s name — especially when that author is your very dear friend!  To be fair, I’d only done twenty interviews in a row that day (hey, either you grab authors at conferences or it’s hard to pin them down — and boy is my voice hoarse in the clip) — but seriously, how on earth do you forget your friend’s name?

So here in all it’s glory, at Susan’s insistence, is our Blooper outtake reel.  Have fun!

What Susan doesn’t know, is that Harlan Coben knows all about it.  This is a little souvenir that is coming to her by mail today! 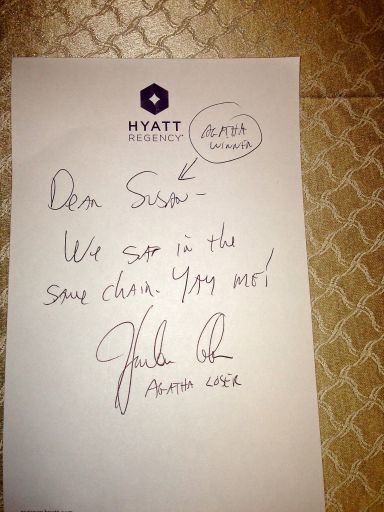 And here is footage from Susan’s Agatha acceptance speech (yes that is me shrieking next to her):

Now, the winner of Susan Boyer’s book:  Lowcountry Boil is:  Deborah D ! Please contact us within ten days to qualify for your prize. 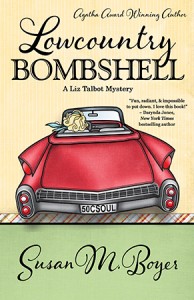 Here’s a blurb from Lowcountry Bombshell, so hot off the presses, it sizzles!

Private Investigator Liz Talbot thinks she’s seen another ghost when she meets Calista McQueen. She’s the spitting image of Marilyn Monroe. Born precisely fifty years after the ill-fated star, Calista’s life has eerily mirrored the late starlet’s—and she fears the looming anniversary of Marilyn’s death will also be hers.

Before Liz can open a case file, Calista’s life coach is executed. Suspicious characters swarm around Calista like mosquitoes on a sultry lowcountry evening: her certifiable mother, a fake aunt, her control-freak psychoanalyst, a private yoga instructor, her peculiar housekeeper, and an obsessed ex-husband. Liz digs in to find a motive for murder, but she’s besieged with distractions. Her ex has marriage and babies on his mind. Her too-sexy partner engages in a campaign of repeat seduction. Mamma needs help with Daddy’s devotion to bad habits. And a gang of wild hogs is running loose on Stella Maris.

With the heat index approaching triple digits, Liz races to uncover a diabolical murder plot in time to save not only Calista’s life, but also her own.

Join us next Tuesday when Manda gets the scoop on our own Lena Diaz’s latest book.

And on Wednesday we have a bonus visit from Allison Brennan and Laura Griffin. Gwen pins them down to talk about their collaboration, Crash and Burn.

Susan Boyer sat down with me in a fun interview to celebrate her upcoming book, Lowcountry Bombshell. She explains what Lowcountry is, gives us her favorite “Boil” recipe and shares a ton of laughs. Please note, Susan actually WON the Agatha after filming. (I introduced her as an Agatha finalist in the tape). Not only that, but this USA Today bestselling author (and my friend, yay!!) has also been nominated for the Daphne and the MacCavity awards, too!

I’m so proud I could burst.

On Thursday, please stop by for more about the book, a blooper reel, Susan’s Agatha speech, and a special message from HARLAN COBEN to Susan. Oh, and even better, you’ll find out who won a copy of the first book in the series: Lowcountry Boil, which will be given away to anyone leaving a comment here (or at DianaBelchase.com).  (Note there is only one prize for both blogs, but you can leave a comment in both places for an extra chance to win.)

In the meantime, here is Susan’s Top Ten List of things that make her feel like a bomshell.

10. Finding the perfect shade of lipstick

8. Getting a bit blonder at the hands of my fabulous stylist, who is Italian and calls me beautiful with an awesome accent

7. Mani/pedis at my favorite salon, where they pour me a glass of champagne when I walk in (they do that for everyone, but still)

6. Slipping on a new dress in the dressing room and discovering it compliments my curves

5. Mango margaritas with the girls

4. Driving up to Starbucks and they already know my order (even if it’s because I’m that crazy woman who drives through in her pajamas with bed hair and sometimes talks to herself)

3. Singing karaoke in heels so high they only get worn for singing (well, and maybe one other thing)

2. Getting dolled up to go out with Sugar

1. The way Sugar looks at me when I get dolled up (even though we’ve been married for a way long time and my curves have fluffed out quite a bit over the years)

So to win a copy of Susan’s Lowcountry Boil, please leave a comment and let us know what makes YOU feel like a bombshell! 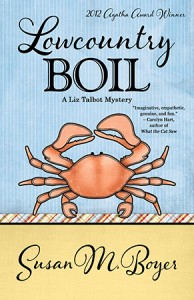