The Daphne Du Maurier Award for Excellence in Mystery/Suspense

Published Nominees from Kiss and Thrill!

We’re so proud of you both! 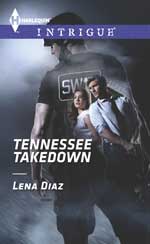 A SWAT officer in small-town Tennessee will do anything to protect the innocent beauty whose life has been put on the line.

It can’t be a coincidence that in the past twenty-four hours, three different thugs have tried to kill or abduct Ashley Parrish. Sexy SWAT team leader Dillon Gray saved her, but now he wonders why someone would want to murder the beautiful accountant…and why he finds her so infuriatingly attractive.

Then the FBI comes after Ashley for embezzlement, and Dillon knows he must protect her from a killer and prove she’s being framed. Taking her on a hair-raising run through dangerous terrain barely fazes him. But wanting her for more than just one night scares the hell out of him.

When a coed falls prey to a sadistic murderer, forensic psychiatrist Dr. Caitlin “Caity” Cassidy and FBI profiler, Special Agent Atticus Spenser, are called in to testify–one for the defense, one for the prosecution. With warring approaches to justice, these two rivals have been butting heads for years–both inside the courtroom and out. And at first, this case appears to be no different.

But when a brutal attack leaves the accused man dead and Caity in critical condition, petty differences take a backseat to saving lives. As the lone survivor, Caity knows too much, and the killer–a madman calling himself the Man in the Maze–is coming back for round two. Now Caity and Spense must join forces to uncover the killer’s identity before Caity’s time–and luck–runs out.

Posted in about us, Author Spotlight, Diana Belchase

Last week was an exciting one for all of us at Kiss and Thrill, so you’ll have to excuse me for a moment while I pause to brag a bit about my brilliant blogmates.

First up, huge congrats the the amazing and talented Sharon Wray, who not only won the Single Title Romantic Mystery/ Suspense Daphne award for her manuscript ROGUE’S ESCAPE, but also won the overall unpublished Daphne for having the highest score!

Second, we are all thrilled and delighted that Krista Hall won the Golden Heart® for best Romantic Suspense for her fabulous manuscript BROKEN PLACES! Congrats Krista!!!

Last, because Krista couldn’t make it to RWA in Atlanta this year, special thanks go to Sarah Andre, who accepted the award
on Krista’s behalf. Sarah was stunning and wonderful as she delivered Krista’s touching speech. (And thank you to Lena Diaz, who recorded the speech so I could watch the excitement at home.)

Posted in about us, Announcements, Krista Hall, Sharon Wray

The Daphne Du Maurier Award for Excellence in Mystery/Suspense nominees are in!  This has to be one of the biggest awards in the book business, and we at Kiss and Thrill are excited that three of this year’s past guests are on the list!  So a big round of applause to:

Allison Brennan   for her book Kiss Me, Kill Me.

Cindy Gerard  for her book With No Remorse

Roxanne St. Claire for her book Face of Danger

Just remember you heard about these books here first!  Do we know how to pick them or what?  LOL.

Kiss and Thrill wants to congratulate all the authors in both the published and unpublished divisions of the Daphne.  We’re rooting for all of you!