Congratulations to Rachel Grant on release #3 in her Flashpoint series. FIRESTORM is out today!

CIA covert operator Savannah James is after intel on a potential coup in the Democratic Republic of the Congo, but she needs a partner fluent in Lingala to infiltrate the organization. Sergeant First Class Cassius Callahan is the perfect choice, except he doesn’t like her very much. He doesn’t trust her, either, despite the sparks that flare between them, fierce and hot. Still, he accepts the assignment even though their cover requires Savvy to pose as his mistress.

They enter battle-worn Congo to expose the financing for the coup. A trail of cobalt, gold, and diamonds leads them into the heart of a jungle in which everyone is desperate to find the mother lode of ore and gems. Betrayal stalks them as they follow the money, but Savvy will stop at nothing to bring down the would-be dictator before he can ignite a firestorm that will engulf all of Africa.

Deep in the sultry rainforest, spy and Green Beret forge a relationship more precious than diamonds, but Cal knows Savvy is willing to sacrifice anything—or anyone—to complete her mission. As they near the flashpoint, Cal will have to save her from the greatest threat of all: herself.

And here are the previous two books in this incredible, high-octane romantic suspense series. 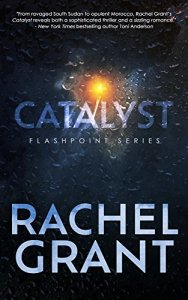 When a food storage depot in famine-struck South Sudan is torched, American aid worker Brie Stewart flees, only to land in a market where she’s the next item up for auction. Is the attack on the aid facility another assault upon the war-torn fledgling democracy, or has her family set her up as a pawn in their quest for oil rights?

Chief Warrant Officer Sebastian Ford crossed paths with Brie years ago when she was a shill for her family’s company, pushing a pipeline that threatened his tribe’s land. Determined to lead the rescue operation to save her, he won’t let her abduction—or the attraction that flares between them—get in the way of settling their unfinished business.

The Green Beret’s skills are put to the test in the flooded grasslands of South Sudan, where they must battle nature and dangerous factions who are after more than oil. Bastian and Brie put their hearts on the line as they find themselves embroiled in a conflict that extends beyond country and continent. Together they must douse the spark before it reaches the flashpoint and engulfs everything they hold dear.

In the volatile tinderbox of the Horn of Africa, Morgan Adler has made the paleoanthropological find of a lifetime. The discovery brings her to the attention of a warlord eager to claim both Morgan and the fossils, forcing her to make a desperate dash to the nearby US military base to beg for protection.

Master Sergeant Pax Blanchard has orders to intercept Dr. Adler before she reaches the base, and in so doing saves her life. After a harrowing afternoon he safely delivers her to his commanders, only to find his responsibilities toward protecting the obstinate archaeologist have only just begun.

Morgan and Pax are forced to work together in the Djiboutian desert heat, but it is the fire that ignites between them that threatens to combust them both. For the Green Beret, involvement with the woman he must protect is a threat to his career, while for the archaeologist, the soldier is everything she never wanted but somehow can’t resist. When Morgan uncovers a mystery surrounding Djibouti’s most scarce and vital resource, the danger to her reaches the flashpoint. For Pax, protecting her is no longer a matter of following orders, and he’ll risk everything to bring her back alive.

To purchase your copy of any of Rachel’s books above, just click on one of the covers!

Happy release day, Rachel! From all your fellow Kiss and Thrill authors.