← KaT’s Carey Baldwin is a USA Today Bestselling author!!!!
A View of the White House →

has swept nearly every major published book award this year. This comes as no surprise. The author of more than 18 books, Lena has always been a favorite among judges of great literature, and most of her books have been nominated or been winners.

But this year her nominations are exceptional. Look at this incredible list:

Deep Cover Detective is a finalist in the 2017 Daphne du Maurier Award for Excellence in Mystery and Suspense. 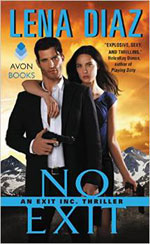 No Exit is a finalist for the 2017 Holt Medallion award.

Hostage Negotiation is a finalist in the Romantic Suspense Category of the 2017 Carolyn Readers Choice Award.

Arresting Developments is a finalist in the Series Action Adventure Category of the 2017 Carolyn Readers Choice award.

Deep Cover Detective is a finalist in the Series Action Adventure Category of the 2017 Carolyn Readers Choice award.

A total of four books up for five national book awards! In the book biz this is something that gives all of us the vapors, as Southern girls like to say. 😉

A former Navy Brat, Lena’s books have authenticity, action, and heat. They have been translated in to German, Turkish, Japanese, and Norwegian and have been sold in many countries including the USA, Japan, Canada, the United Kingdom, India, France, Australia, Holland, Sweden, the Netherlands, Belgium, Iceland, Mexico, Turkey, and Italy.

More than the awards listed here, and the dozens of awards Lena has won over the years (for a partial list click HERE), is the role she plays in the writing community. She is always there with a supportive word, a can do spirit, and she’ll go out of her way to help everyone, even newcomers. There are few like her and I’m so very proud to know her.

Congratulations to Lena Diaz from everyone here at Kiss and Thrill!

I am an author, who won the Golden Heart for my suspense novel "The Spy in the Mirror" and was a Golden Heart finalist, once again, for my second novel, "The Spy in the Harem." I am also a triple Daphne Du Maurier finalist for three other books. Please follow me at my website: TopSecretWashington.com, or friend/follow me on Facebook, LinkedIn and Twitter or on my YouTube Channel: https://www.youtube.com/user/DianaBelchase See you there!
View all posts by Diana Belchase »

← KaT’s Carey Baldwin is a USA Today Bestselling author!!!!
A View of the White House →