All about Sharon Wray.

KaT member, Sharon Wray supplied all these photographs…take a look at them…aren’t they SO Sharon Wray?! She’s the most optimistic, genuinely kind and considerate friend/fellow writer I know.

I believe the entire romance writing world knows her because of her eight RWA Golden Heart nominations in six years, because she’s always volunteering for chapter positions or cheering others on through yahoo loop emails, and because of the hundreds of poignant photographs and heartfelt blogs she’s posted over the years.

We were hugely ecstatic but a bit confused when we learned her most important moment in being a writer (getting the coveted book contract offer from a publisher) was communicated in a Publisher’s Weekly announcement. (The rest of us usually type the news in all caps all over social media.) Sharon was in the middle of a hectic summer and getting ready for the RWA national conference, so she hurriedly told the overall story, but promised to tell the nitty-gritty details when she returned. And here she is:

Can you tell us about the moment you realized your publishing dream had just come true?

It was surreal. After I hung up on a Skype call with my agents (Deidre Knight and Kristy Hunter), having accepted Deb Werksman’s offer from Sourcebooks, I sat at my desk shaking. After all these years (11!), I’d actually sold a book. And two more! I couldn’t even call my husband. I was so afraid to say anything to anyone because I was worried someone would  tell me it was all joke.

But now that I have a deadline, I know it’s not only not a joke, it’s a dream come true. I’m so grateful to my agents and editor, and I’m determined not to let them down. 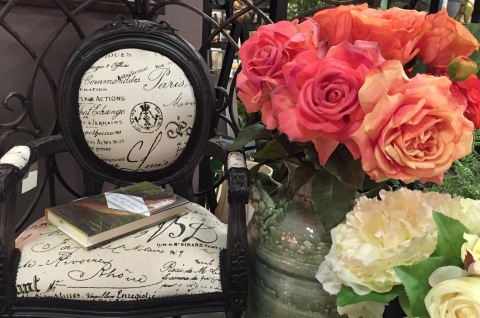 Explain ‘auction’ for those readers who’ve never heard the term associated with novels.

An auction is when a novel has two or more offers for publication from different publishing houses, and a literary agent negotiates the best deal for his or her author. Negotiations can include (but aren’t limited to) advances, subsidiary rights, marketing plans, release dates, etc. For the author, it’s very exciting and a crash course in all things publishing. Here’s a great article by Rachelle Gardner who explains it much better than I ever could!

What was your family’s reaction after you sold?

Donut the Dog whose lack of interest keeps Sharon humble.

They were all so excited, including the dog, and they gave me hugs and we all cried. Then we went out to dinner to celebrate! And while at dinner, the kids asked about going to Disney World to really celebrate. Still thinking about that one. 🙂

When did you you know you wanted to start writing novels?

In 2004, my four-year old twins and I moved to Savannah, GA from Fairfax, VA (temporarily) to take care of my father who was dying of cancer. Taking care of my dad and the twins, while my husband was still in Virginia, was one of the most stressful things I’ve ever had to do. There was little free time and lots of stress involved.

It was during this time that my sister-in-law Kieran Kramer (now a USA Today Bestselling author for St. Martin’s Press) suggested I keep track of everything going on in my journal. Kieran had always been a writer and was actively pursuing a romance writing career. And I’d always admired her talent and perseverance.

During the summer of 2004, I found that writing helped me find a place for all of my emotions and I slowly moved from non-fiction into fiction. I realized that all the stories I’d always had in my head needed an outlet. In 2005, after my dad’s death, I finished my first manuscript, joined RWA, and entered the Golden Heart (and didn’t final!). After that, although I was in the early stages of learning how to write, I was hooked!

In those 11 years, you’ve done an incredible amount of research and learning writing craft. What “Ah-Ha!” craft resources do you recommend?

There are so many, but here’s a list of my favorites:

Blake Snyder’s Save the Cat

Back to your contract details! Do you have tentative titles and publication dates?

The Series title is The Deadly Force Series which I love. I honestly don’t know yet about whether or not I can keep my original titles. I also don’t know my publication dates, but I hope to know soon.

When Next We Meet

Pale in Her Anger

I thought this saga was planned for 6 novels. Are you cutting the series short or planning on another multiple book deal?

For now I’m writing the first three books in the series for Sourcebooks. Hopefully, if things go well, I’ll be asked to write the next three.

Can you give us the overall story line for the series?

The Deadly Force series is about Colonel Torridan and his group of elite ex-soldiers who operate a self-defense school while seeking the truth behind an operation gone wrong.

These men are devoted to each other, determined to seek the truth instead of justice, and willing to risk their honor, their lives, and their souls to save themselves and the women they love. And, in the process, protect the world.

Do you believe in Serendipity?

Yes. I also believe in God’s timing. And in my case, the timing couldn’t be more perfect. I have three books to write in the next two years, but the kids go off to college next summer. I was already worried about how I was going to handle that (I suspect I won’t be handling it well) but now that I have three books coming out, I know I’ll be too busy to cry or feel lonely.

The timing of Sourcebook’s offer isn’t an accident and I’m so grateful that when the twins do go off to school, I’ll have plenty of work to focus on (besides my husband and dog!). I’m also grateful this didn’t happen earlier. I wouldn’t give up the time I’ve spent with my family for anything in the world.

Favorite foods you can’t say no to?

Yummy. 🙂 Do you have any advice for writers still waiting for the call?

Never stop writing. But Winston Churchill said it best in his October 29, 1941 speech at his childhood school (he almost didn’t graduate).

This quote–this speech–has never failed me in my darkest moments of self-doubt and worry.

Sharon, I think you know how much we’ve looked forward to celebrating your publishing contract, and how excited the eight of us are for you! Thanks for the pictures, and even formatting this for me, because that’s just the kind of friend you are!! –Sarah

You can find Sharon here at Kiss and Thrill and DON’T miss her own blog www.sharonwray.com (it’s what a blog SHOULD be!)

All photographs courtesy of Sharon Wray.