← THURSDAY WINNER!
Book Report, or What I’ve Been Reading →

I’m taking a break from our usual format today at Kiss and Thrill to instead share with you a real life adventure that could one day become fodder for fiction. As an archaeologist, I’ve had plenty of real adventure. Not the Indiana Jones kind, but still, noteworthy moments of finding particularly interesting sites or cool artifacts.

Like the time in Sint Maarten when a land crab surged from the sandy soil beneath my pit-partner’s shovel right after I said the soldiers who died there in the 1630s were going to haunt us. (Totally true, and one of my favorite field memories ever. Scared the heck out of both of us.)

[Note: Follow the embedded links to see photos of the rapid, or go to YouTube to see videos.] 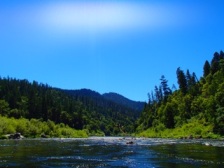 This year, for my family’s summer vacation, we did something really special:  four days of whitewater rafting on the Lower Klamath River in Northern California.

I’ve never gone rafting for more than a day trip and so had never experienced rafting on a gear boat. Gear boats are larger, heavier, and have a big metal frame inside, in which our camping supplies were strapped down. Loaded with supplies, the raft held our family of four and our guide, Matt. Another, slightly smaller gear raft held the rest of our supplies and was piloted by Molly, a second guide.

On day two of our trip, we reached the biggest rapid we’d face, Dragon’s Tooth, and Matt—a wonderful man with fifteen years experience—gave us a choice: we could ride the rapid, or hike around.

It was early August and probably 95 degrees out. We’d been sitting by the river for an hour as Matt and Molly scouted the rapid. We hadn’t followed them down the path to see it for ourselves because we’d spotted poison oak along the route. As archaeologists, my husband and I have had poison oak so many times our immune systems go out of whack when we encounter the nasty stuff. So this is the choice that ran through my mind: walk through poison oak, or go over an exciting class IV rapid? 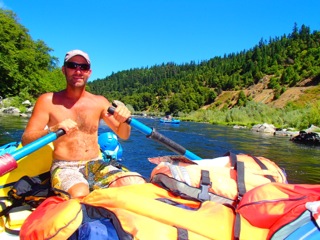 Seems rather obvious when looked at that way, doesn’t it?

Minutes after making our decision, we were back in the raft, wearing our helmets and lifejackets, and for this tricky rapid my husband and I were given paddles—the only time on the entire four day trip we helped paddle the big raft.

We entered the river slowly. We practiced paddling. We were set and paddled toward the slot between boulders.

All was fine, until we missed the opening by inches and stopped on top of a boulder. We were stuck. My husband was seated just above the drop. He tells me the fall, had we been able to slide forward, would have been steep and nasty. I think my nine-year-old son might have yelped in fear at this point, but I’m not sure. From where I sat, I know it didn’t look good.

[Linked photo note: we were stuck on the rock below the surface in the center of the frame.]

Matt had us all move to the right, toward my husband and son’s side of the boat, and we wiggled the raft free. “Paddle forward!” he yelled.

Truth here, this happened so fast, he might have instructed us to paddle backward. This all blurs together. But I do remember being instructed to paddle, getting back in my seat, tucking my foot in the slot and paddling as instructed. 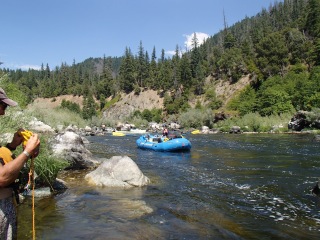 Then we started to slide backward.

Okay. We’re going backward. Over the drop. No problem. There is another slot. We can go through it.

According to my husband, at this point he rolled backward from the raft. I didn’t see it. I was too focused on the river and my paddle. I don’t know if my kids screamed at witnessing their dad’s ejection from the raft. We are talking milliseconds here.

The boat pivoted, then surged into the rapid. But we continued to turn. Sideways, we washed down toward a huge boulder on the left—my side of the boat. The boulder loomed over my shoulder as we raced toward it. I braced for impact, as if we were in a car about to hit a brick wall. But that’s not how it works in a raft. In a raft, the water carries you up. With swift motion we slid up the side of the boulder, completely without impact. Then we arced over.

[Linked photo note: I believe the boulder to the right of the frame is the one that flipped us.]

As an author, I struggle with character arcs. As a whitewater rafter, I can say that an arc is a soft, graceful sweep along a jagged, fearful face. As we crested the point of no return my most profound thought was, “Oh. So this is how it’s going to go.”

And then I was in the water. This part is as jumbled in my mind as I was. If I were writing this as fiction, I would describe hitting the water, reorienting myself and breaking the surface to gasp for air. But to describe it like that here would be a lie, because I remember none of that.

I remember releasing the boat as we flipped, and I remember surfacing, but I don’t remember the moments I was underwater, I don’t know how I landed, or where. Because none of that mattered in the moment when it happened. The only thing that mattered then was my children, who were being tossed into the Lower Klamath River along with me.

How would they handle it? Where would they land? Would they be okay? Would they remember how to swim out (on their backs, feet first), as we’d practiced the night before?

After I surfaced, I think I knew right away that the raft was behind me. But I wasn’t looking for the raft, I was looking for my babies. As luck would have it, my son popped up right next to me. I was grateful to grip his lifejacket and pull him toward me. To know he was okay. The rush of emotion made me want to cry then, and I could cry even now, as I write this. My son was scared, but okay. I turned him face up and feet first to down the river. He didn’t know I had him and fought me at first. But I kept my grip. Nothing could pry him from my hand.

He shouted that he’d lost a sandal. Stupid Velcro straps. But I didn’t care about the shoe. I had him. And that’s all that mattered.

I instantly spotted my husband up ahead. He tells me that because he’d entered the river first, he’d had no idea the raft flipped until he looked back and saw our son and me in the water.

Husband and son accounted for.

But where is my twelve-year-old daughter?

I turned and looked upriver. There was the upside-down raft. There were other rafts and rafters on the banks, in the river. They’d seen us flip and were shouting instructions and trying to help. But I couldn’t see my daughter.

I screamed for her, asking where she was. I repeated the shouts with increasing urgency. I probably couldn’t hear the answers because I was yelling so loud. My husband yelled too.

Was she under the raft? Had she hit a boulder?

This moment will stay with me for the rest of my life.

My son called for his sister with the same urgency. My panic had become his. I wish I could have spared him this, but it wasn’t in me to be calm and reassuring just then.

My husband refers to this as his City Slickers moment. You know, the scene in the movie when Billy Crystal’s character comes to the realization of what his one thing is, the thing that gives his life meaning? It’s not like we needed this moment. But still, it happened. Dragon’s Tooth drove the point home.

Where is my daughter?

Of course, she was fine. She was on the other side of the raft. She’d surfaced underneath (as we’d feared), but was by the edge, and slid out from under and gripped the line. She was swimming next to our guide, who had called to us that she was okay, but we couldn’t hear.

She heard us calling out, so she knew we were safe. Of all of us, she had the best time when we flipped. All the excitement and adrenaline, none of the panic. She loved it.

Once we heard the shouts that she was fine, we swam to the side. I lifted my son out onto a rock, where he stood with his one barefoot and worried we’d lost all our supplies.  But we hadn’t. Everything was strapped down perfectly by our awesome guides. In the end, the only thing we lost was that one shoe, but we had a second pair of sandals for my son, so the loss didn’t matter.

We were all fine. Shaky, but fine.

With help from other rafters, our heavy, loaded raft was flipped back over. One dry bag, containing the pillows and sleeping pads, had taken in water. But the day was so hot, even the soaked pillow was dry before we went to bed.

That night we slept on a sandy beach by the river. The sky was cloudless and the moon didn’t rise for hours. I lay there, with my family around me, too in awe of the star-filled sky and the intensity of the day to close my eyes and sleep. We saw a few shooting stars. 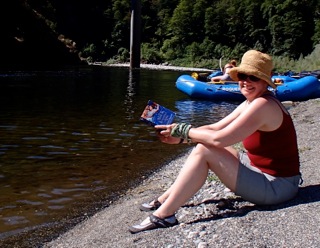 I loved every minute of our river adventure vacation. I’ll admit it was more of an adventure than I expected. We knew, of course, when we booked it that flipping a raft, or being tossed in the river was a possibility. The river is always boss. But knowing that and believing it could really happen are two different things. I honestly never thought we’d flip a gear raft. To put it in perspective, Matt has had only one other gear raft flip in 15 years.

There were so many fabulous moments on our four-day river adventure. Years from now I will remember sleeping under the stars; the bear we spotted on the bank; the fishing bald eagles; enjoying fabulous meals prepared by Matt and Molly; my daughter acing class II rapids in the inflatable kayak; my son’s laugh as we were drenched by rapids; and my husband’s exuberance as he jumped into the waterfall at the end of our morning hike.

← THURSDAY WINNER!
Book Report, or What I’ve Been Reading →