DP Lyle and RUN TO GROUND

Carey says: Today I am delighted to have the awesome DP Lyle back with us on Kiss and Thrill. Doug is here to tell us all about his latest thriller, RUN TO GROUND, which released August 7th to high acclaim. One lucky commenter will win a copy of RUN TO GROUND. Here is a sample of what people are saying: 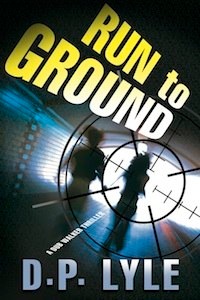 “A first-rate thriller! Run to Ground delivers the goods: great characters, fine investigative details and the kind of nail-biting action that leaves you rapidly flipping the pages, breathless to discover what will happen next!”~Lisa Gardner, New York Times best-selling author of Catch Me

“Murder is never as simple as the motive. There are too many loose ends, and when Dub Walker uses his expert knowledge of forensics and criminal behavior to solve the crime, you’d better be ready to Run To Ground. Doug Lyle takes fear and revenge, adds a bucket of greed, and gives us a wild ride to the finish!”~David Morrell, New York Times best-selling author of The Shimmer

After reading EVEN STEVEN, Lyle’s contribution to the LOVE IS MURDER anthology, I’m really looking forward to reading RUN TO GROUND. I’m also really happy to know I am not the only one who wonders whether or not the couple sitting across from me having coffee is

plotting murder 🙂 Read on to see what I mean:

Where do you get your story ideas?

Every author has been asked that question.

The short answer is: Everywhere.

That might sound trite, but it’s the truth. Something you see or read or overhear sparks an idea. It could be a conversation or a couple arguing at a nearby restaurant table or an odd character you see on the street or simply an idea that pops into your head. One of those out-of-the-blue images or scenarios or bits of dialog that seem to come when daydreaming, or sleeping, or mindlessly driving down the road.

From this seed an idea blossoms. One that raises the question: What if? What if this happened? What if that person did this? What if that couple enjoying their morning coffee was actually planning a murder? What if that briefcase contained state secrets? Or an explosive device? Or a deadly virus?

The answer to that two word question–What if?–is where stories are born.

What if a good, God-fearing couple is threatened by the man that killed their only son, forcing them to plan the man’s murder and their own disappearance?

That’s the question that drove my short story, “EVEN STEVEN,” which can be found in the latest International Thriller Writer’s anthology THRILLER 3: LOVE IS MURDER

But the “story” didn’t stop there.

After this story was completed I sent it to my older sister, a retired school teacher and accomplished storyteller herself. She read it and then asked me: What happens next? My response: What do you want to happen next? She laughed saying she wanted to make sure that I intended for it to have an ambiguous ending. I did.

Then over the next few weeks I asked myself: What does happen next? Where could this story go from here? What are the possible avenues these characters could travel. These musings of course generated another What If?

What if a forensic evidence and criminal behavior expert must track down a seemingly average, very religious couple who murdered the killer of their only child, dumped their entire lives, and disappeared?

That’s the central story question of my next Dub Walker thriller, RUN TO GROUND, now available from Oceanview.

What would you do if someone brutally murdered your only child, got off on a technicality, serving only months for a minor infraction, and continually taunted and threatened you from behind bars? Could you hide your growing rage from family and friends? Could you gun the killer down? Could you change your ID and leave behind your entire life—family, friends, jobs, home—and disappear.

For Tim and Martha Foster the answer to each of these questions is yes.

This is the scenario that faces Dub Walker in RUN TO GROUND.

From RUN TO GROUND:

“I can still smell him.” Martha Foster inhaled deeply and closed her eyes.

Tim stood just inside the doorway and looked down at his wife. She sat on the edge of their son’s bed, eyes moist, chin trembling, as were the fingers that clutched the navy-blue Tommy Hilfiger sweatshirt to her chest. It had been Steven’s favorite. He had slept in it every night the first month, until Martha finally pried it away long enough to run it through the wash.

Behind her, a dozen photos of Steven lay scattered across the blue comforter. A proud Steven in his first baseball uniform. A seven-year-old Steven, grinning, upper left front tooth missing, soft freckles over his nose, buzz-cut hair, a blue swimming ribbon dangling around his neck. A playful Steven, sitting next to Martha at the backyard picnic table, face screwed into a goofy expression, smoke from the Weber BBQ rising behind them. Tim remembered the day he snapped the picture. Labor Day weekend. Just six months before that day. He squeezed back his own tears and swallowed hard.

Martha shifted her weight and twisted toward the photos. She laid the sweatshirt aside and reached out, lightly touching an image of Steven’s face. The trembling of her delicate fingers increased. She said nothing for a moment and then, “I’m taking these.”

Tim walked to where she sat and pulled her to him, her cheek nestling against his chest, her tears soaking through his tee shirt. He kissed the top of her head.

Tim smoothed her hair as details from a room frozen in time raced toward him. A Derek Jeter poster, a photo of Steven’s Little League team, and his Student-of-the-Month certificate hung on the wall above his small desk. A crooked-neck lamp spotlighted a history text, opened to the stern face of Thomas Jefferson. His baseball uniform draped over the chair back, sneakers haphazard on the floor. Exactly as it had been the day their lives jumped the track.

They had been through this dozens of times. What they could safely take. What must be abandoned. What could be traced back here. They had scrutinized everything they owned. Their marriage license, birth certificates, engraved wedding bands, the calligraphed family tree Martha had painstakingly drawn and framed, and boxes of family keepsakes. Any photo that showed their home, cars, neighbors, family, Steven’s friends, teammates, or school, had to be abandoned. As did Steven’s Little League uniform. Each of these could undo everything if seen by a curious eye.

Tim had always won these what-to-take-what-to-leave arguments, but now, with the end so close, he knew he could no longer resist her.

“Thirty-six hours.” She eased from his embrace, looked up at him, and swiped the back of her hand across her nose. “I can’t believe it’s here.”

“He might’ve just been blowing off steam.”

“You don’t believe that.”

No, he didn’t. He knew better.

“Besides, that’s just part of it. We can’t let that animal…” She screwed her face down tightly, suppressing another sob.

Tim touched her cheek, catching a stray tear with his thumb. “It’ll be okay. Keep the pictures.” He walked to Steven’s desk, lifted the uniform from the back of the chair, and returned to her side. “The uniform, too.”

“His uniform?” She took it from him as a sob escaped her throat. “He was so proud of it.” She swallowed hard, and then dabbed her eyes with her shirtsleeve. Her voice broke as she asked, “Are you sure?”

“Thank you,” she whispered.

“But nothing else. Nothing that leads back here. This life is over. Finished. Tomorrow night Tim and Martha Foster no longer exist. But Robert Beckwith and Cindy Strunk will get a chance to live yet again.”

She shook her head, uncertainty lingering in her eyes. “What if they find out Robert and Cindy have been dead for a couple of decades?”

“It’ll work. We’re not the first to rummage through old obituaries and cemeteries. Lot’s of people have done it before us.”

“Only the ones you hear about. Most just move on. Become someone else.”

He brushed a wayward strand of hair from her face and lifted her chin with a finger. “You’ll make a perfect Cindy.”

She smiled, weak and tentative, her face tear streaked, her nose reddened, but it was still a smile. There hadn’t been many of those lately.

“It’s not like we have another option,” Tim said. “We can’t simply move. We have to disappear. Become completely untraceable. Be reborn.”

She took a deep breath and let it out slowly. “It will be like dying.”

“Except that we’ll have another chance. A new life.” He looked down at her. “And Steven will live on in our memories.”

“It’s not fair.” She hugged the uniform to her chest.

“Can you live with this? What we’re doing?”

She sat silently for a moment as if considering his question. The question that had plagued them for the past six months. Even as they pressed ahead with the planning, with getting the documents in order, with building their new life, their new identities, the question hung out there on the horizon. A horizon whose sharp edge dropped into an abyss. A horizon that rapidly approached. Could they do this? Could they really leave everything and everyone behind?

He has worked with many novelists and with the writers of popular television shows such as Law & Order, CSI: Miami, Diagnosis Murder, Monk, Judging Amy, Peacemakers, Cold Case, House, Medium, Women’s Murder Club, 1-800-Missing, The Glades, and Pretty Little Liars.

He is a practicing Cardiologist in Orange County, California.

Carey says: Doug, congratulations on your new release and welcome back to Kiss and Thrill! We’re glad to have you anytime! Now I’d like to open things up for questions or comments. Remember, DP Lyle has a copy of RUN TO GROUND for one lucky commenter!

Carey Baldwin is a mild-mannered doctor by day and an award winning author of edgy suspense by night.
View all posts by Carey Baldwin »

Posted on August 14, 2012, in Carey Baldwin and tagged DP Lyle, Love is Murder, Run to Ground. Bookmark the permalink. 28 Comments.